The history of the charity goes back to 195 when they were actually called The Bridlington Hospital’s League of Friends. The organisation was formed following the after effects of Nationalisation when it become apparent that small cottage hospitals such as Lloyds, Bempton Lane and The Avenue, the three, hospitals in Bridlington still needed the local people to support the running of their own hospitals.

In 1953 a town meeting was called and nearly all the voluntary and charitable organisations were in attendance and the League of Friends was born, with the first chair Mr Stan Langton being elected. The League was eventually affiliated to the newly formed National Association of such Leagues, and its sole aim was to provide help and comforts for the three Bridlington hospitals. This included visiting the elderly sick, providing flowers, magazines, television sets, furnishings, lockers and ward curtaining.

The Bridlington League of Hospital Friends provided the Avenue Hospital with a medicine trolley, records trolley and photo therapy unit for jaundiced babies in 1975. 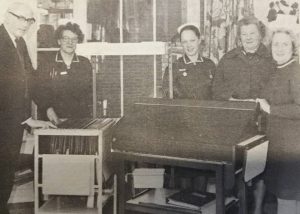